) is a Japanese word meaning "the way of the sword." It is the traditional Japanese samurai (さむらい

) art of fencing. Today, Kendo is practiced for its mental and physical rewards. Practicing Kendo helps you cultivate and build humility, respect, honor, calmness, and agility.

The Concept and Purpose of Kendo

The concept of Kendo is to discipline the human character through the application of the principles of the katana (sword: 刀

The purpose of practicing Kendo is

to mold the mind and body, 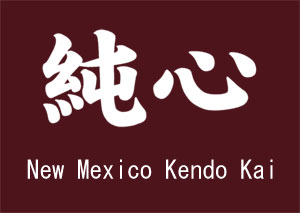 ) means pure mind/heart
to cultivate a vigorous spirit,
and through correct and rigid training,
to strive for improvement in the art of Kendo,
to hold in esteem human courtesy and honor,
to associate with others with sincerity,
and to forever pursue the cultivation of oneself.

This will make one be able

to love his/her country and society,
to contribute to the development of culture
and to promote peace and prosperity among all peoples.

(as stated by All Japan Kendo Federation, 1975)

A Brief History of Kendo 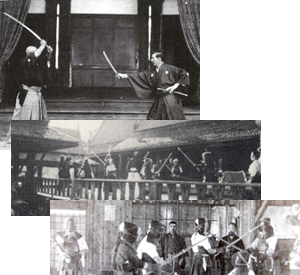 Kendo, as practiced today, has been developed over about two hundred years. In 16th century, Japan was in a period of civil war. The way of the sword was studied in order to ensure the survival of one's family and clan. The samurai (warrior: さむらい

) was trained so that his sword became like an extension of his arm.

There was a large number of expert swordsmen during this period, and they had their own unique styles. These masters led approximately 600 different fencing schools (ryu: 流

Both the wooden sword (bokuto or bokken: 木刀

) and the sword (katana) were used to practice the technique of fencing. Certain fundamental moves, called kata(s) (form: 型

), were selected and are still fundamental to Kendo. Katas are important to master when one practices Kendo, but learning only katas is insufficient to cover all of the situations that may arise in a sword fight. In order to be able to practice much more freely and safely, bokken and katana were replaced with shinai (bamboo sword: 竹刀

Today, Kendo is practiced mostly with the shinai. Katana and bokuto are used only for katas.

The Basis of Kendo 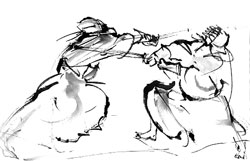 Practices in Kendo are very diverse. Each has its own objectives, and they collectively form the basis of practices needed to make progress in Kendo. As it is with all budo (warrior way: 武道

) sports, a lot of patience and tenacity is required. Many people may feel little strange starting out in Kendo because the rules, the footwork, and the handling of shinai are unique to Kendo. There are many different techniques (waza: 技

) that must be practiced with persistence in order to make them second nature. Once the beginner has learned the basic technique he or she will begin practicing with bogu and against an opponent.

) can gauge their progress during keiko (practice [free fighting]: 稽古

). One has to have high intensity and great mental and physical strength to do well in keiko. This grows from carrying out the basic training in a serious fashion.