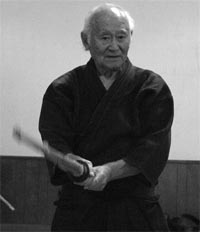 Miyahara Sensei
New Mexico Kendo Kai (NMKK) was established and became a member of All US Kendo Federation in 1990. Maki Miyahara Sensei, Hanshi Hachi Dan, has been our mentor and is a member of the Black Belt Magazine Hall of Fame, and was honored with Jokun medal (PDF) from the Emperor of Japan.

We were featured on the July 2003 issue of Kendo Nippon: